Namdaemun Market was recommended to me by a coworker last Friday.  Its a market at the South Gate of the royal palace.  Namdaemun translates roughly to “South Gate” and my Sunday plan was to wander around the market in the afternoon and grab lunch.  I googled the market and took out my map, it appeared to be near Seoul Station so that’s where I headed.

After a few stops and a transfer on the subway I found myself exiting Seoul Station up a long escalator that took me into a vast open pavilion with towering skyscrapers surrounding me.  There was a taxi stand and an abundance of people flooding in from all directions.  I heard hundreds of Korean phrases but that didn’t hep me figure out where to go.  I took out my map and found Namdaemun to the south and west of Seoul Station.  I oriented myself with a quick glance at the afternoon sun and off I went.

Walking down the busy streets I saw an assortment of art and sculptures.  Their addition to the already vibrant cityscape helped brighten the scene.  I walked past a number of restaurants as signs of poverty became more frequent. The sidewalk grew dirtier when suddenly I saw a sign for a homeless shelter and foodbank.  At the next intersection I took out my map and found a sign indicating that the Sookmyung Women’s University was to the right.

The streets climbed uphill and the shops became livelier.  The sidewalk was lined with college students and brightly colored advertising.  I had to be close.  The street I was looking for is parallel to this one, now to find it.  I turned down a sidestreet in search of Namdaemun.  As I left the university I saw more garbage on the side of the roads and small unkempt apartments.  The backdrop of luxurious skyscrapers gave an odd aura to the scene. 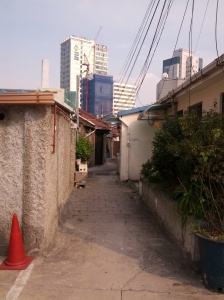 Namdaemun had to be here somewhere.  I kept going weaving in and out of the main road; the market is supposed to be massive.  How could I have missed it?  I turned the next corner and saw the entrance to, well, something?  A huge rock and banner likely told where I was, unfortunately it was in Korean.  I kept walking up the steps and quickly realized I had stumbled upon a school.  There was a middle school baseball game being played not far ahead but no market.

Heading back to the main street I found a map indicating that I was near Namyeong station.  I took out my map to try and get my bearings with the two when I heard in nearly perfect English, “can I help you?”  A couple noticed I was lost and offered some much needed assistance.  I told them I was looking for Namdaemun Market, apparently I was 3 subway stops away with a transfer.  I had been heading towards Namdaemun on my map but apparently that was just a street name.  The actual market is at the Hoehyeon subway stop. These two stops flanked Seoul Station.

A quick ride corrected my error.  Inside the subway station there were even signs for the market; I followed them and as I exited the subway I could hear the bustle of the market growing louder.  Upon exiting the subway I was thrust into the middle of it all.  Hundreds if not thousands of people surrounded me as we all perused the goods.  The first shop I saw was selling fruit on a stick; I had my choice of watermelon, cantaloupe, pineapple and a few I didn’t recognize.  I opted for pineapple and began chowing down as I headed deeper into the market.

The sights and smells were overwhelming; everywhere you turn there was something new being sold.  There were all kinds of jewelry, clothing and footwear; exotic snacks and tourists struggling to understand how much their souvenir cost.  Locals came through for their groceries and household goods while others like myself were simply enjoying the atmosphere.

I turned down a corridor with permanent shops.  The path was narrow as I was forced to walk between a merchant and his wares.  He mumbled something in Korean.  I kept walking having no idea what he was telling me.  There was a tailor measuring a customer not far up while his counterpart or perhaps rival sat meticulously sewing away.  A store with glimmering kitchenware caught my eye.  I could use a new frying pan and perhaps a couple dishes.  I browsed his wares but, finding nothing that suited me, kept walking. 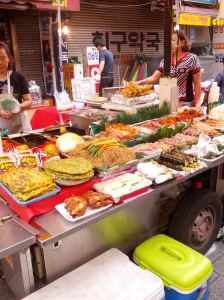 The corridor ended abruptly in a T.  To the right I could hear traffic on the street although it was hidden from my view.  I went left and the path opened up again to the crowded market.  Was this the same section as before?  I couldn’t tell but was enticed into an haberdashery.  I took note of a few items but decided I didn’t want to accrue more luggage until my school situation was sorted out.

At the next intersection the bustle came back to the market.  The smells were tantalizing here.  Fried dough, fresh fruit, seafood of all kinds and other exotic delicacies.  I passed a pile of steaming crabs, the chef had to keep dragging them back to the pan; they were obviously unhappy at their predicament.  I opted to try a snack that resembled a corn dog.  It was some kind of fried doughy coating surrounding a choice of sausage, cheese, crab, squid or mystery vegetable.  I got the sampler with a small piece of each.

I strolled past a bar with foreigners struggling to order while Koreans chatted away.  Having finished my snacks and realizing I wasn’t buying anything I decided it was time to head home.  Finding the subway turned out easier than I expected.  In my latest wanderings I found myself next to the fruit stand from earlier. Getting home was much easier than getting here but then again now that I know where to go next time won’t be so bad.