Bijindo is an island just south of South Korea.  After enjoying a sunrise hike in Hwangmaesan we took the ferry from Tongyeong Ferry Terminal to Bejin Island (do means island in Korean).  The 40 minute trip went quickly as sea spray and fresh air came over the sides of the boat while a few seagulls entertained us by trailing behind and snatching chips out of the sky!

Once on Bijindo it was easy to find our pension.  The whole island only has a few hundred people living on it in one small village and another smaller beach-side hamlet.  From afar it is easy to confuse Bijindo with one of Thailand’s many tropical paradises. 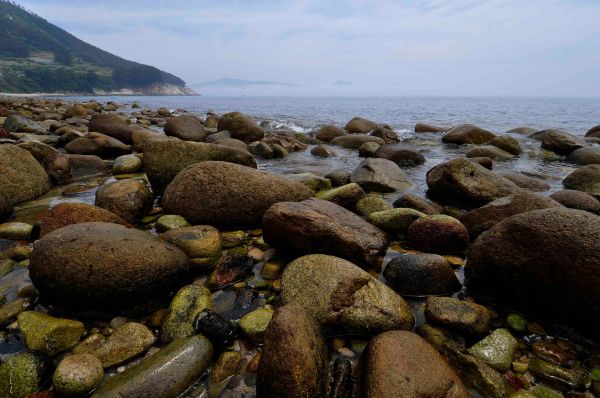 END_OF_DOCUMENT_TOKEN_TO_BE_REPLACED

I taught myself to read Hangul in the first few months here.  I can now read with about 70% accuracy.  I mix up vowels a lot but am confident that will come with more practice.

I started a Korean Class last week and am getting the textbook next week.  Its been helpful with learning basic grammar even though I’ve only had 2 classes.  Plus it forces me to actually take notes and practice while having a venue for practicing my pronunciation without a Korean friend laughing.

I also plan to attend a coffee house language exchange on Mondays where we just talk in different languages.  Next week is my second time!

That being said the most exciting part is that I just figured out how to type in 한굴 (Hangul) on my keyboard!  The first thing I wrote (largely due to my limited vocab from my notes) was

Its pronounced roughly Nanun uen song ee ruel sarang haangyo.  Note that in Korean you say the sentence “Subject, Object, Verb” so that translates directly to “I monkey love”

Whats your favorite animal?  Any other ridiculous sentences I should translate for practice?

Monday at work my coworker, Sara, invited me to join her at a “meetup.”  For those of you that don’t know Meetup.com is a social network where people can plan events with a variety of purposes.  I’ve heard of it but this was my first experience with it.  It was listed as a “language exchange” with 38 people attending at a coffee/tea shop in Hongdae.

We hopped on the subway after grabbing some tempura and got to Hongdae by around 7:00.  We easily found Chloris Tea & Coffee and went upstairs to see a crowded room.  We ordered tea and grabbed some of the last vacant seats next to a solitary Korean girl.

END_OF_DOCUMENT_TOKEN_TO_BE_REPLACED

The ride from Seoul to Suwon is roughly an hour long.  Ben and I hopped on the subway after grabbing some Paris Baguette for breakfast and a Subway sandwich for a picnic lunch.  It was about 11AM on Sunday morning by the time we arrived in Suwon.  The guidebook said to get off at Suwon where we could walk to Hwaesong, aka “brilliant fortress.”

When I mentioned to my Korean coworkers that I was going to Hwaesong Suwon they were surprised I had even heard of it.  Few of them had been there although those who had said it was a good trip.  For the two of us it was as simple as looking in the guidebook under “day trips.”

The walk from the subway station to Hwaesong was longer than we expected but easy to follow.  There were brown signs every few hundred meters to let us know we were going in the right direction.  After about 30-40 minutes of walking we finally saw signs of the fortress.  There were massive walls that led up a hill towards a casual gate with a road running through it.  The forest erupted just past the gate and we continued our climb wandering up a trail through the trees.  Walking parallel to the wall we eventually came across a path that led up to stone steps that watchmen patrolled a couple hundred years ago.

Stopping for a water break an a few pictures we realized that there were many more steps to go.  The walls were interspersed with arrow slits and holes for rocks or cannons and the climb kept going.  Before long we found ourselves at the top with a stupendous view of the city, a small pavilion and a crossbow tower.  We snapped off a few photos before breaking for lunch in the shade.

After eating we continued along the wall passing a sign letting us know that we were about 12,000km from NYC before coming upon a marvelous bell.  The thunderous toll from this intricately designed artifact had a beautiful display surrounding it with a giant log hanging for those who wished to ring it.

Most of this massive fortress was built in the late 1700’s under King Jeongjo and although most fights were likely with steel gunpowder was certainly in use.  Further down we passed wooden cannon and arrow towers.  The wall continued along with regularly placed slots for Korean warriors to attack their enemy while staying safe behind the walls.    We caught a view of the training yard where he had his soldiers learning “24 martial arts.” 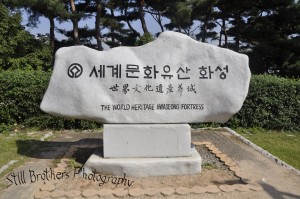 Stopping at another cannon tower Ben posed for a picture in front of the painted turret before starting our descent.  The way down provided a great view of the city inside the walls of this brilliant fortress.  We reflected on how the city has grown yet wondered how much there was actually a change in the life here in Suwon.  Hwaesong was predominantly a training ground and holiday retreat for the royalty so the locals ran a bustling town inside these very walls hundreds of years ago. 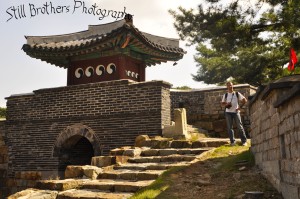 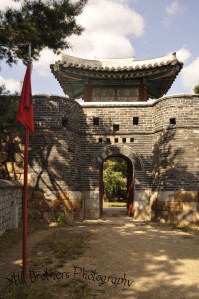 Today we passed through the Paldalmun, or the South Gate, to find a town with a touristy market supplying all kinds of wares.   There were restaurants, banks, clothing stores and a mini-mall with stalls selling everything you can imagine; the street vendors were happy to see us and one of them even posed for a picture. 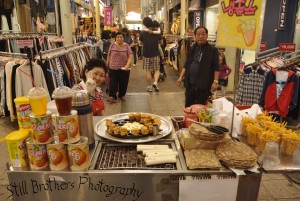 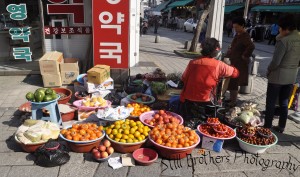 We strolled through the bustling town on our way to the hanok in the center passing another fabulous bell before turning into the training grounds.  In the yard we found metal figures inlaid into the tiled floor demonstrating positions with various weapons for the martial arts. As we got closer to the hanok we saw the remnants of a parade full of traditionally dressed Korean guards.  We caught a few lucky glimpses as they exited the village. 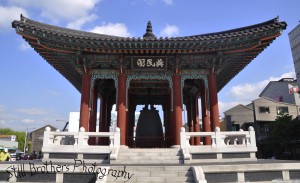 Ben and I continued wandering through the town heading for the western gate.  Walking down the narrow alleys we saw many modern homes and an absurd tire-man before coming to a green hill leading up to the rampart.  Following the wall south we were greeted with a magnificent display at the Janganmun, the North gate to the city. 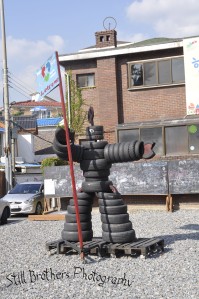 The massive entrance to Hwaesong was clearly refurbished with new wood and exterior paint but the inner decorations on the roof displayed colorful dragons keeping watch.  We climbed the steps to the top of the wall to find a yin-yang painted on a doorway that was clearly made for someone shorter than us.  Inside we found a semicircular protrusion of the wall from which they could bombard enemies who breached their first set of doors.  Atop the wall we found a cannon facing an obstructed view of the hills due to the modern apartments. 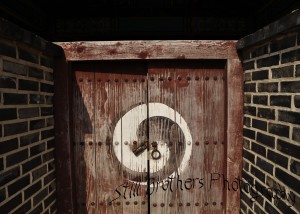 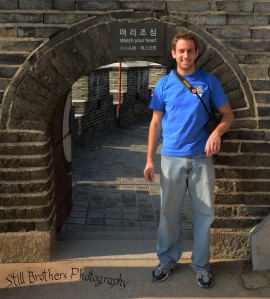 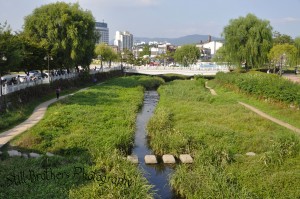 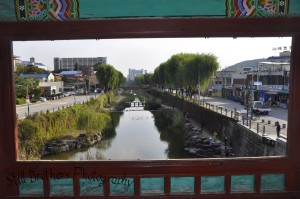 Along the way we stopped at one more gate but unfortunately it was covered with a bleak facade for renovations.  We continued catching up on brotherly things and enjoying a vigorous discussion on religion and politics during the remaining walk to the subway.  Hwaesong Suwon certainly was a “brilliant fortress” and well worth it; I wholeheartedly recommend the day trip to anyone who has an extra day in Seoul!

This post was from my first time buying a laptop.  Please see this post for advice & recommendations on how to get the best prices!

I came to Korea with a Samsung Galaxy and a tablet, the Nook HD.  Together I had internet when I needed it and it met my needs but I knew I wanted to get some upgrades.  After I got my Alien Registration Card I replaced my phone with an LG Optimus but was waiting until my first paycheck to buy a laptop.  While in the States I read that non-Apple products were significantly cheaper in Korea but upon first inspection I didn’t find that to be true.  Yes, my phone is paid off in monthly installments with my data plan and will only cost me about $50 but the first laptops I saw at E-mart were about the same as what I found in America.

Luckily Ben wanted to see the electronics mall to look at camera lenses while I was working and confirmed that there were some great prices, what appeared to be about 30% cheaper than at E-mart.  I convinced my new Korean friend Rachel to go with me in exchange for dinner afterwards at the Itaewon Global Food Festival.  We hopped on the subway Saturday after I got back from fencing and took the 30 minute ride to Yongsan.

The mall is very easy to find.  There are signs in the subway station that say “Yongsan Electronics Mall” and we arrived at about 7:30.  Luckily even though they close at 8:00 PM there were still a few vendors open.  Walking in there are dozens of vendors selling what appears to be the same thing.  We passed about 12 camera & lens booths and 5 or 6 monitor stations before seeing the sign that said computers – 5th Floor.

Taking the escalator up we found multiple desktop booths with huge gaming rigs, tons of monitor stations and even a festive furniture section with colorful lounge chairs and sofas.  While walking around we eventually found a laptop booth with Samsung’s in the ₩700,000-₩900,000 range ($700-900).  There were a few other models and prices went all the way down to about ₩390,000 ($390).  The best part was the attendant spoke nearly perfect English!

I told him I wanted a laptop that had an SD card for my camera, made sure it had wifi and an English operating system and said I’d like an upgraded display card but don’t need the top of the line.  He asked about brand and price and I told him price was more important than brand.  I wanted more bang for my buck and didn’t need it to say “Samsung” if all that meant was I would pay an extra ₩300,000 ($300).

He immediately asked if he could make a recommendation and pointed to the HP Pavilion G6 sitting on display.  It had a nice widescreen display with a numpad built into the keyboard and was listed at ₩490,000 ($490).  I immediately started playing around on it and found it easy to use and navigate.  I asked if it could come with English windows and he said of course.  I asked about Microsoft Office and he said that was included too!  He showed me the display specs and that it was bluetooth capable before pulling up a K-pop video.  The display quality was superb and I was practically sold.  The upgraded graphics card made this machine cost about ₩800,000 ($800) in E-mart so when he told me he would give me “best price” of ₩460,000 ($460) for cash I just asked him where the ATM was.

In hindsight I wonder if he would have negotiated even lower but in my mind I just picked up a high end laptop for around $450.  He threw in a laptop bag, a headset and a mouse for free too!  Turns out I didn’t need my Korean friend but I would recommend bringing one to anyone else visiting the mall because I doubt all the vendors are this fluent.