I love Seoraksan National Park, I hate early mornings.  3 am.  “I can do this!” I thought to myself.

Nope.  I give up, you win this round nature.  I closed my eyes. 5 more minutes was all I needed.  Then I would be ready, after all Seoraksan is famous throughout South Korea for its fall foliage.

The bus slowed to a stop and idle movement turned into shambling zombies slowly rising and departing half asleep.  I willed myself to get up, eyes still closed I peeked with my left.  There was Warren.  No wait.  He was on the other bus.  Gotta channel my inner Warren and get people ready to go! 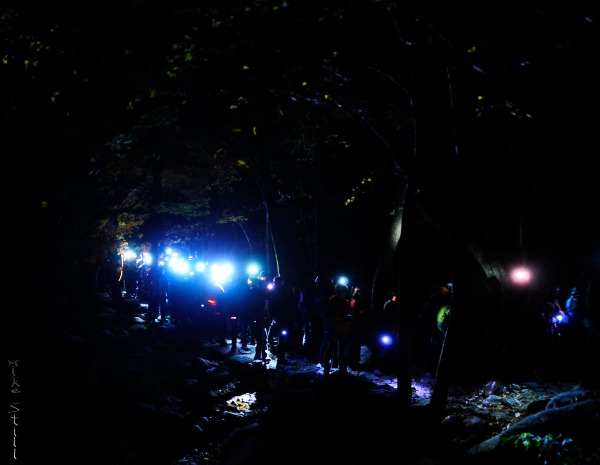 Dragging myself off the seat I grabbed my bag and headed into the crisp autumn morning.  Wait, this isn’t morning.  We are here well before the asscrack of dawn.  With any luck we’ll see dawn’s beautiful spectacle from the top of Korea’s 3rd highest peak, Daechongbong.  We started off in the darkness only to find hundreds, perhaps even thousands of Koreans with the same idea.  Never have I ever seen such a traffic jam on a hiking trail! 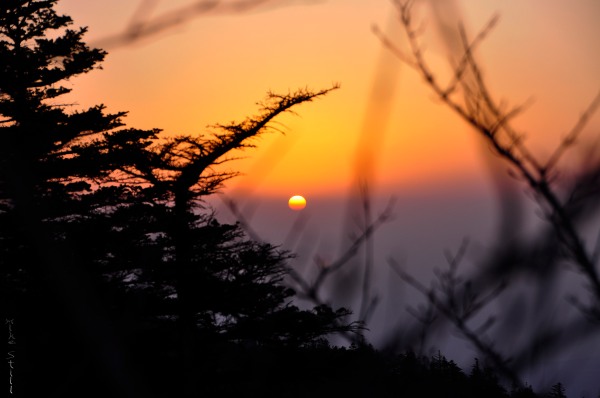 Slowly the crowd thinned out as some of us ducked, dived, dipped and dodged our way through the line sneaking ahead only to find the crowd grow dense yet again at the next staircase.  Climbing ever higher the wind began whipping through the leafless trees (at this altitude in mid-October the leaves have already fallen).  A purple-orange hue crept over the horizon threatening to emerge moments too soon.   Forgetting the soreness in my legs I pushed ever onward, stopping only for the occasional traffic jam from 3am all the way until up 1708 meters to the top of Daecheongbong by 6:45!

Crowded sunrise at the top of Daecheongbong 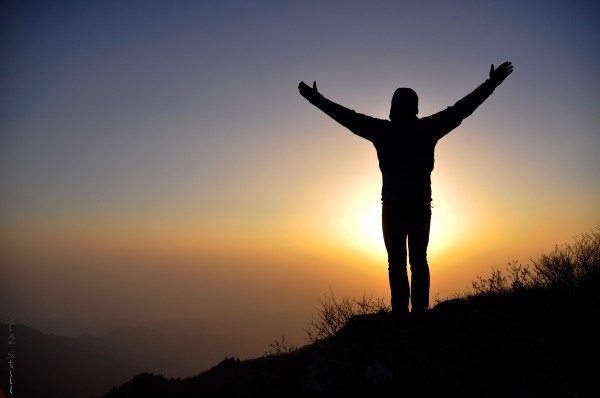 What a view!  Last time I tried this hike I was too sore and all too slow.  Yeah this was my second time summiting Daecheongbong but there’s something magical about watching sun rise over the ocean from nearly 2 kilometers up.  Slowly more of our 90 person group wandered to the peak.  We had about a dozen of us up here snacking and snapping away; I knew Jungcheong shelter was just a few hundred meters below and decided to skip a big breakfast at the peak in lieu of warmer conditions.

Descending is a downright pleasant experience after turning it up to full throttle on Daecheongbong’s steep trails.  We strolled among the branches and rocks and were inspired by Dinosaur Ridge to our right when I suddenly became unsure if my knees would hold out for that exhausting finish. 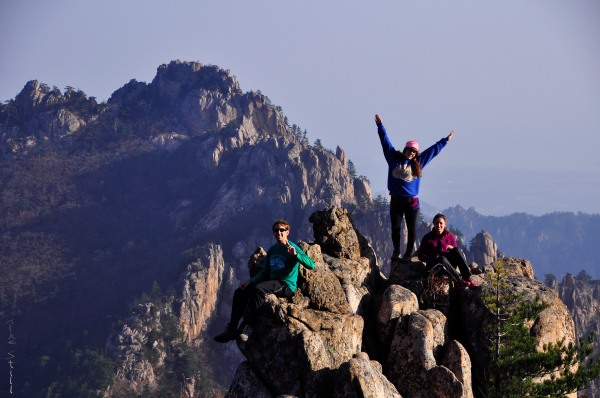 Pausing for photo breaks, a few snacks and a regular breather we crossed a river and made it to Huiungak shelter by 9:15 (10am was the latest we could leave if we wanted to attempt Dinosaur Ridge).  Warren and a few dozen of our hiking buddies were waiting and snacking when suddenly Warren told everyone to head to the first peak of Dinosaur Ridge for a picnic.  Up there we’ll have a magnificent view and an abundance of sunshine; the only advantage to Huiungak shelter was a water supply and the ability to buy ramen or canned tuna.

The steep climb to Dinosaur Ridge’s first peak combines 2 series of rope climbs as we scrambled up the rock face.  In between these treacherous paths lies a narrow, flat, stony walkway.  Here we began to catch some glimpses of fall colors before getting to the final set of ropes.  Pulling hand over hand we ascended to a precipice with a handful of (mostly Korean) tourists and a stunning view. 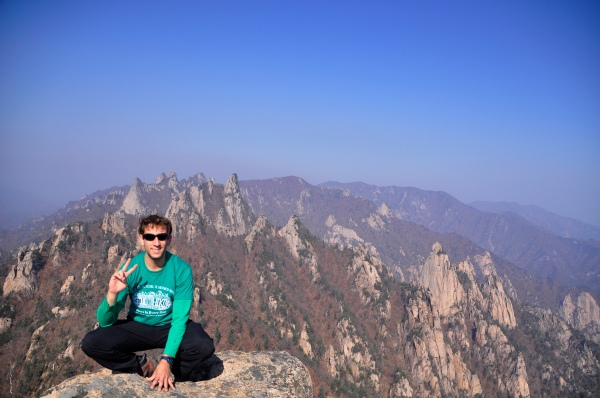 Posing at the top of Dinosaur Ridge’s first peak

Click for an awesome panorama from Dinosaur Ridge’s first peak

Adam and I followed Warren when he decided to free climb the last 30 meters of this peak.  Hugging close to the rocky mountain I tried to flatten myself as I reached up for new hand and footholds.  The wind threatened to eject us but we persevered and were rewarded with a unique 360 degree view of Seoraksan.  Behind us we could see Daecheongbong while before us 6 more peaks of Dinosaur Ridge, a second Devil’s Ridge and Ulsanbawi stoically stood in the distance. In the foreground below lay a lush valley bustling with greens, yellows, reds and oranges!

The view had me convinced.  My return to Dino Ridge could wait.  After relaxing at the top and having a snack we carefully made our way back down where I announced to a handful of followers that I would lead a group back down and into the vibrant valley.  Retracing our steps we continued downward.  Ever downward; our knees and backs begged for a break but we hustled onward until the sound of a trickling stream grew into a ravenous river plummeting between the rocky path into a magnificent series of waterfalls. 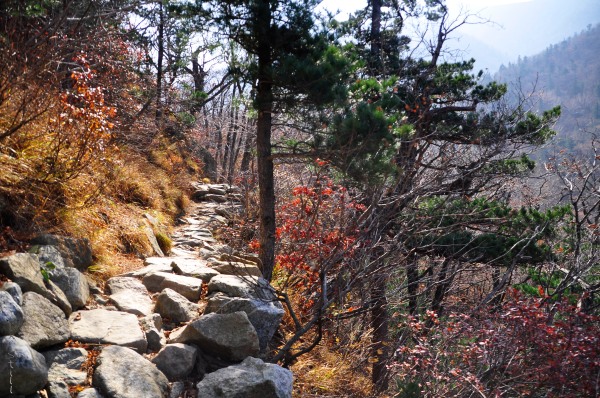 We napped in the shade of autumn leaves listening to the falls; a few of my brave companions even dipped their feet into the icy mountain water.  Lingering a moment longer we were convinced onward by the prospect of Korean food and drink at the bottom of the mountain. 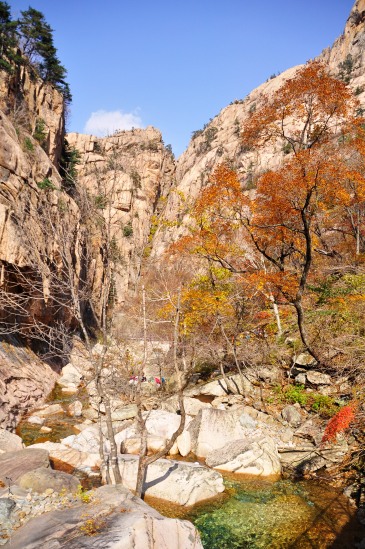 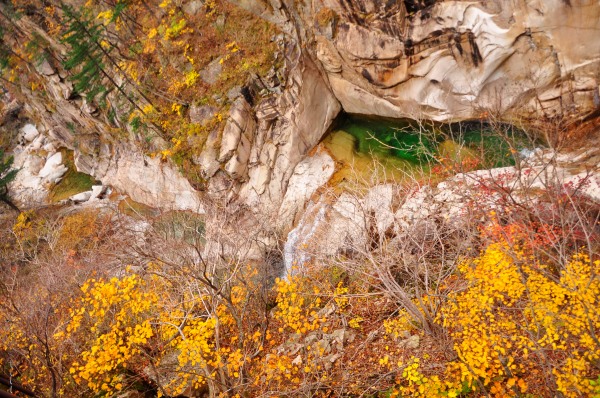 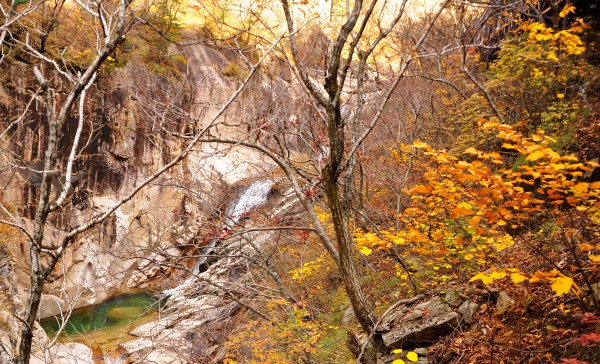 Still hoping for more fall foliage we continued our descent.  The trees showed a few signs of the changing seasons but our attention was drawn towards the beautiful river filled with waterfalls.  As our journey took us lower along the river leaves became more and more abundant.  The waterfall rustled along with windblown leaves for a peaceful hike in this lovely valley. 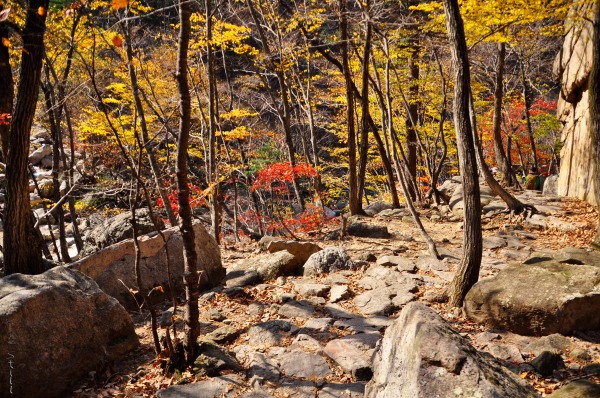 As our journey took us lower along the river leaves became more and more abundant.  The waterfalls were replaced with a series of pools that locals were taking full advantage of.  A few were swimming in the brisk stream while most enjoyed a scenic picnic with dancing leaves on this peaceful hike in a lovely valley.

The blue sky above highlighted our vivid journey as I stopped for more photos.  I soon lost the rest of my travel buddies in this beautiful forested trail but quickly made Korean friends.  An older couple asked for a photo with me and we chatted for a few hundred meters before I fell behind again for photos.  This repeated a handful of times and provided a great opportunity for some nature filled language exchange! 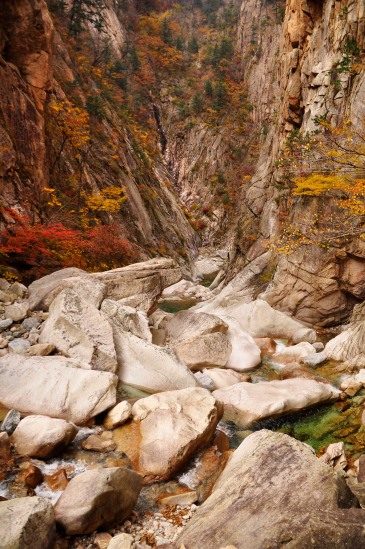 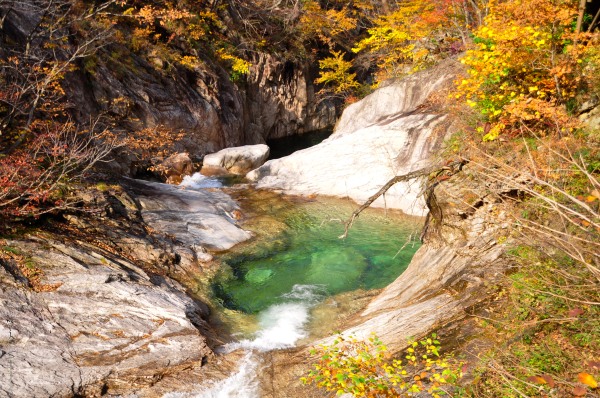 Finally nearing the bottom of the trails I did the unthinkable.  I turned left!  To the right was a bridge and just beyond a restaurant, friends, dongdong ju and delicious Korean foods.  600 meters to the left promised Geumganggul, a “cave with a buddha” that I longed to see.  Little did I know that it was 600 meters of vertical climbing ending with a staircase going straight up the cliff face.  The cave itself is impressive to reach but merely an alcove with a prayer area.  The real reward is a stunning view of the low-lying valley.  Colors intermingled among jagged cliffs separated by the beautiful river below.  My legs weren’t happy but I was ecstatic about this view! 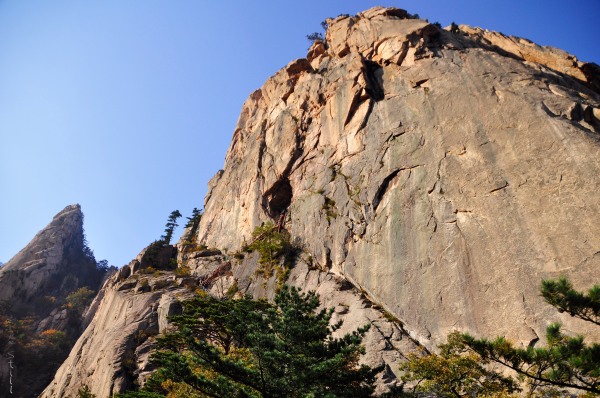