Opening a bank account went smoother than I expected.  The hard part was waiting for my Alien Registration Card (ARC) to process.  I’ve been in this country about a month and it finally processed!  That means I can open a bank account, sign up for a new cell phone number and actually be a real person here in Seoul.

I walked into the KB branch a block from my job and quickly realized no one else in the room spoke English.  The guard at the front understood “open an account” and pushed the button for me.  I took my ticket and waited a few minutes before being called to a teller.  His blank stare dissipated when I switched from “open an account” to “new account”and he started getting the forms ready.  I handed him my ARC and waited.  Luckily he was able to say “name,” “sign” and “number” after pointing to my ARC.  I wrote my name, signed a half dozen times and wrote down my ID number.

It got a little hairy when he asked me my phone number, Luckily I remembered from yesterday that I asked for the same 4 digits of my US number and picked out 7150 an easy to remember first 4.  I didn’t know the first 3 digits indicating Seoul though.  He had no idea what I was saying but when I pointed to the document and was able to write in the final 8 he figured it out.  I asked if it was “yeong, il yeong” (zero, one, zero)?  And he quickly nodded.  Well if its wrong the bank won’t be able to call and check up on me, although if they did call I couldn’t understand the Korean anyway.

A few more signatures and we were stuck again.  He held up 4 fingers and pointed to a keypad.  This time I gave him the blank stare when all of the sudden the light bulb went off.  I had to come up with a 4 digit pin, hit the green button, rinse and repeat.

He turned and pulled out a booklet with some English information about my initial deposit of 50,000 and insurance up to 50,000,000.  Don’t go crazy all at once, that’s Korean Won not English dollars (divide by 1,000 for a relatively accurate conversion).

I waited a few more minutes, printed and signed again and suddenly I had a pastel check card with my very own name on it! 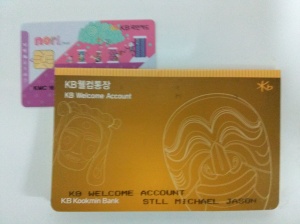 The whole process was relatively simple and only took about 30 minutes.  The toughest part was probably fitting my name and signature in the boxes.  Here in Korea the Hangul characters that represent names  take up significantly less space and there wasn’t a signature that didn’t go into at least two boxes.  Oh well, at least I have a bank account and can set up my direct deposit.  Now lets all cross our fingers that October’s paycheck will be more punctual than my coworker’s experienced last month.