Saturday night was my first “party.” My recruiter put together an open bar with all you can eat chicken, chips and Korean snacks at a little dive called Emobar. It was a small room with Charlie Chaplan projected on one wall and a cluster of tables in the middle to form a giant square. I missed the “wear red or green” on the invite but was welcomed in nonetheless. The recruiters all asked about my school and if I was okay but that I shouldn’t worry because they keep getting compliments about me. 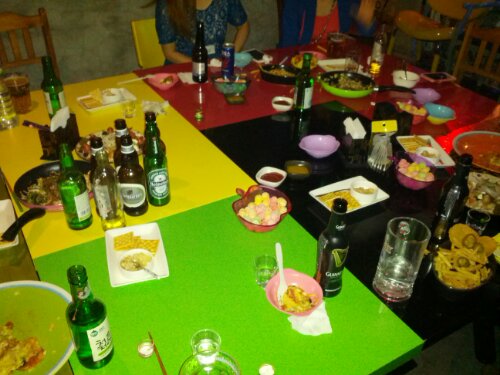 After a brief speech by AppletreeEdu’s founder and a few drinks we all took our seats around the multicolored table for some cheesey icebreakers.  They quickly divulged into Korean drinking games. The first one we played was a Soju game where you flick the cap and pass it. Pretty simple but not too exciting so we quickly moved on to Daegi. This was a mix of rythm, memory and just plain ridiculousness  It was great! After too many of us ex-pats messed it up they asked if we knew any games. Of course I volunteered, with a mixed group including a few old enough to be my parents I thought Swoosh Bop would be a hit! After some quick explanations we were off, the best part was the Korean reactions to the new “kamehameha” move. 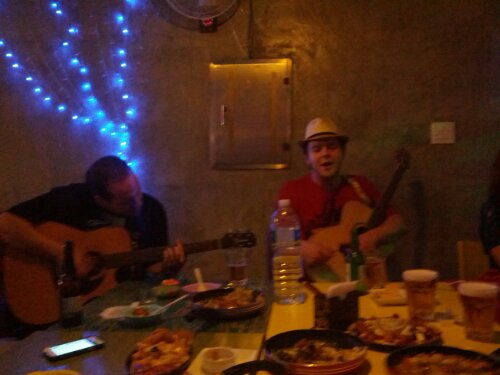 After a few rounds and plenty of bottles there were a few shouts for some live music and before I knew it Hoho and Sean (two of the veteran expats) broke out their guitars and started jamming.  We had some great sing-a-longs to classic rock and even got a taste of some K-pop. They kept jamming and we kept sining when suddenly it was 8:00 and our open bar had come to an end. Everyone decided to head out so I exchanged emails with some of my new Korean and expat friends and invited them to join me in Hongdae where a friend of a friend was DJ’ing.

Getting to Hongdae to meet Sejun (my bug eating friend), his buddy Gary (the DJ) and my coworker Sara turned out tougher than I planned. No doubt the previous festivities aided my difficulties but the real problem was my lack of phone or internet (I should be able to activate my phone on the 23rd when my Alien Registration Card processes).

By now I’ve learned a few more words in Korean and can ask directions but if they can’t answer me in English I’m usually out of luck.  Some wild hand signals and a few strategicly located white people later and I found myself rocking out at Hongdae Playground.  An electric guitarist was laying down a rad riff in the middle of this packed playground when all of the sudden I spotted a blonde, white girl.  Coincidence? Nope, only a handful of blondes in Seoul, I found my friends! 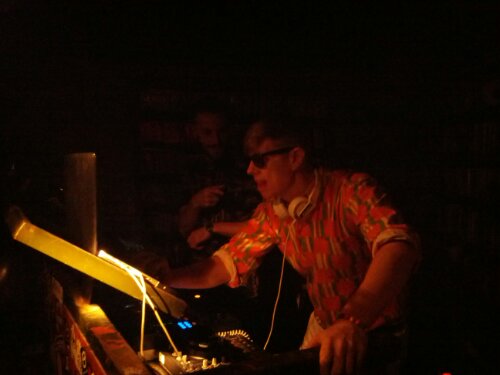 The club, MWG, was just around the corner and we paid the cover, got our free drink ticket and went in. I had a chance to meet Jerry, the DJ, and we fully utilized the dance floor attempting some salsa before it got too crowded.  I quickly realized that this venue had the most white people I had seen in one place since I left the States. It was a nice change of pace and by about 11 the club was packed tighter than gorilla’s thumbs stuck in a chinese finger trap. People were dancing and having a great time, it reminded me of some of my favorite clubs from NYC except that Jerry threw in more 90’s poprock. 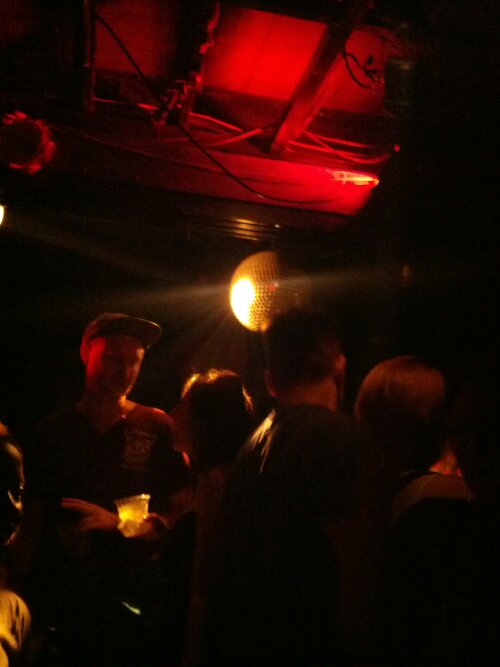 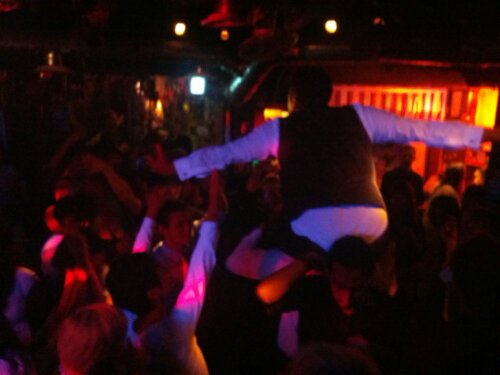 I made a few more friends and before I knew it we were on our way to a pub.  Wit little less noise, a better beer selection and an open air venue the atmosphere here was a welcoem relief. We cooled off and exchanged concert stories. Apparently The KIllers are coming to Seoul soon, gonna have to check that out!. Deciding it was time to get back on the dance floor we found a new club that was playing all American tunes and had a little stage to jump around on. 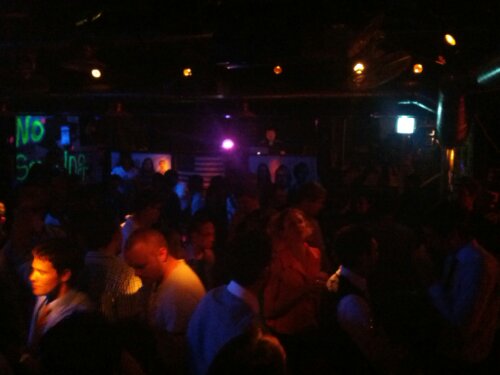 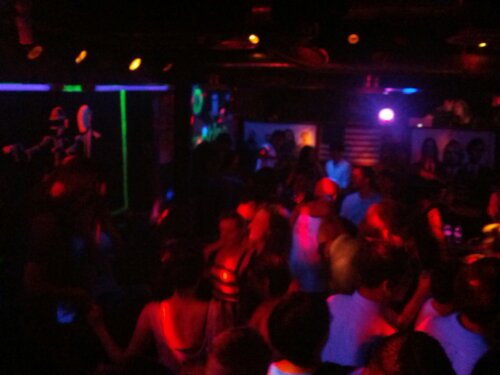 Somewhere in the wee hours of the morning I found out the subway stopped running and didn’t start again until 5:30 am.  I was assured I’d be able to get a cab home so paid no mind and kept dancing away.  When it finally came time to grab that cab it turned out to be much tougher than planned.  My new Korean friend helped hail them but they kept saying that my station was too far, or perhaps they just didn’t want to take someone who can’t speak Korean.

Now I know why so many Koreans party until dawn.  It took dozens of cabs before one agreed that taking a white guy home wasn’t that bad of an idea. The good news was the Asian driver stereotype didn’t hold true for this cabbie; in fact it was a smoother ride than most of the yellow cabs from back home.  I even managed to get to bed before the sun came up. Hongdae will certainly be revisited!

One thought on “Daegi, drinking games and dancing the night away”