Man I love menus with pictures!  Still not quite sure what I’m eating but I know what I’m NOT eating.  It looks like kimchi in the picture but when I asked she said “No, tak.”   That’s good because I’m not in the mood for kimchi.  I think I ordered a pork and veggie dish in a red sauce with cheese.  Presumably its all quite spicy and I’ll let you know what “tak” means later.  The sides just started arriving and similar to last night I’ve got these “o-crackers” 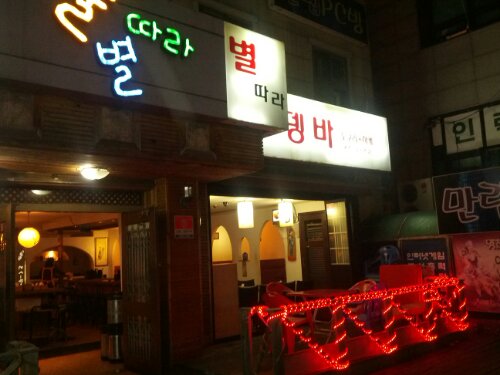 I picked this restaurant mostly out of convenience.  Its right by my apartment and subway stop so if its good, this one will be frequented.  Its not nearly as crowded as last night’s chicken shack but every time I walk by there’s someone eating and they have a larger alcohol selection.

On another note teaching is going great.  My Korean counterpart, Mary, is a lifesaver!  She knows exactly what I need and it appears without even a word and  she’s phenomenal with the students (especially when they refuse to speak English).  I’ve gotten some pretty high praise from administration regarding our “problem child” who has seen noticeable improvement since I started.  I also had some parental praise passed down today.  Unfortunately praise doesn’t raise your paycheck; in fact it seems that it increases my workload.  I’m now teaching every afternoon since the admins “like my teaching style;” perhaps its cause the new guy is too stupid to say no?

It appears the sides at my current restaurant are limited to o-rings.  I think that’s what I’ll call them until someone corrects me (or maybe I’ll keep calling them that afterwards too) 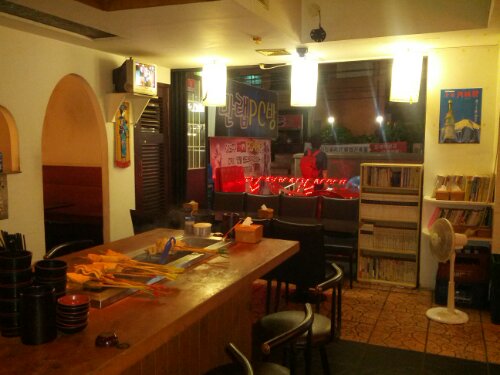 It looks like the Koreans next to me are here solely for the Korean Soap Opera that is playing on the TV’s.  They’re eating something I didn’t see on the menu but looks delicious!  They have a steaming pot with massive skewers and an array of dumplings, meats and veggies in a do it yourself kind of style.  I’ll have to bring a translator to order that.  Or maybe I’ll just find a Korean class!  I’ve heard about a few free ones where they trade Korean classes for an extra hour or so of speaking English with the next group. 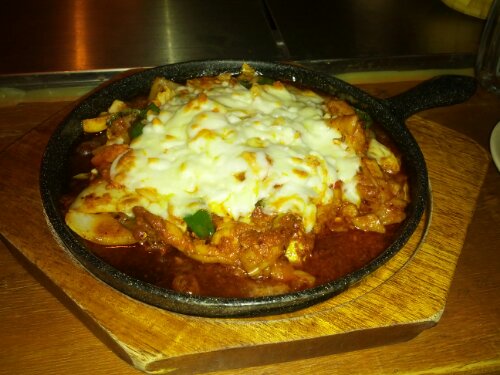 Food’s taking way longer to come out, but, the good news is it just arrived!  Definitely cheese on a bed of veggies and spicy.  There’s meat in here somewhere but its yet to be determined if its  dark chicken, pork, or a mystery meat.  Not that it matters cause its fantastic!  The only problem is my habit of going right for the peppers.  Red or green doesn’t seem to matter here.  They are all hot!