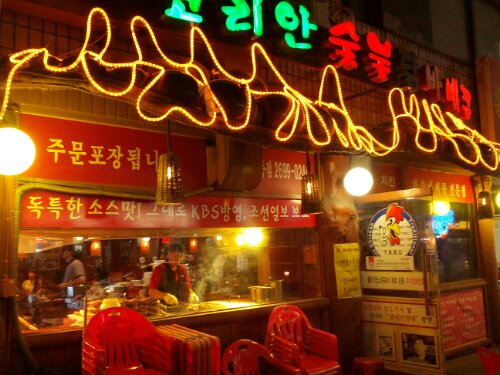 I just ordered chicken.  I think?  Some restaurants in Seoul have pictures in their menu but, so far, I haven’t found any with English menus.  I’m pretty sure I’m getting Chicken.  Scratch that, I hope I’m getting chicken.  When the waitress responded to my finger on a picture she started rambling in Korean.  I understood “hot” and I said no, made a hand gesture that I think she understood to be mild.

As I’m sitting here writing, side dishes keep coming to the table.  I’ve got some kind of bready-snack in little O’s, most are beige except for the occasional green or orange one.   They all taste the same.  I’ve got white cubes that are definitely pickled but can’t tell what veggie and some white stringy veggie with a pink sauce.  These weren’t in my picture of chicken, don’t know what they are but they taste damn good!

I picked this mom and pop joint because they had chicken in the window and a lot of Koreans were eating here.  I figure an empty restaurant is a sign from the locals but I’ll tell you later if it was a good choice.  My chicken just arrived!

Okay, those were definitely hot peppers; and they make jalepeno’s from back home look like the rejects from an elementary school play, where everyone gets a part.  Aside from the overly spicy garnish this dish was amazing!  The chicken was delicious but even at “mild” it warranted a glass of Cass Fresh to cut the heat.  The sides went well with the sauce and took some of the edge off too.  Definitely gonna hit this place up again, but first I’ve gotta polish off the leftovers. Its safe to say I did in fact get chicken.